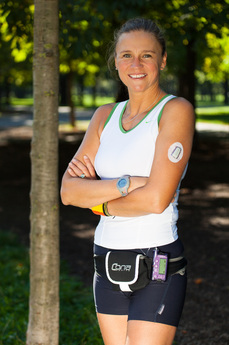 Since 43 years, I go by the name Veerle Vanhuyse. I’ve been living with type 1 diabetes since the age of 16 (took my first shot on my birthday!). Though many people think of me as someone who deals really well with the disease, I still feel as if it’s a full time job with many psychological and physical burdens.

In 2005 I started running. In the beginning it didn’t go very well, but I kept going and it was only a matter of time to hit the 5km.

And believe it or not, I finally got addicted to it!

In May 2012, for some unexplainable reason, I decided all of a sudden I wanted to try the full beast; Berlin marathon in September. And I did it. In the meantime I ran 4 half marathons, a full one and everything in between. Mid September I’ll be doing the Wachau half marathon and November 2nd might just be the most exciting event ever. I’ll be at the start of the NYC marathon; the so called ‘Mother of all marathons’.